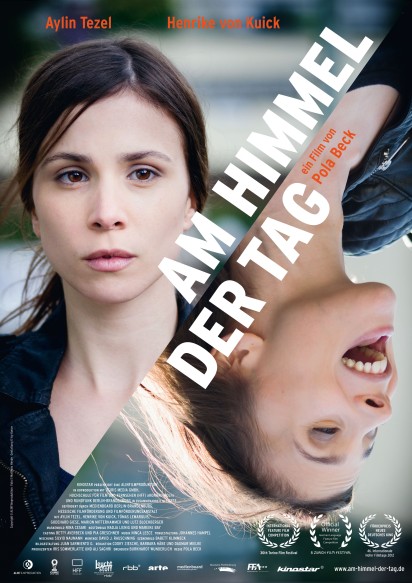 The only German film in the Official Competition of Torino Film Festival is Pola Beck’s first feature film Am Himmel Der Tag (Breaking Horizons). The film is also the first from a new institution called Leuchtstoff, which is a branch of RBB (Berlin Brandenburg Broadcasting). This new entity is financed by the region of Brandenburg and aims to finance and co-produce films that promote the local area. The film has already won the prize of the best German-language film at Zurich’s Film Festival.

Lara (Aylin Tezel) is 25 years old, she studies architecture and lives in her own apartment. Her best friend is Nora (Henrike von Kuick) who also studies with her and they both have a strong relationship. Their lives are rather easy-going since they spend most of their time smoking, drinking, dancing, flirting and trying different kinds of adventures. One night, by chance, Lara bumps into her favorite teacher, Martin (Godehard Giese), who happens to dance at the same club. Unfortunately he seems to prefer Nora’s company instead of hers. As an instant reaction Lara decides to go for a one-night stand with the bartender and she becomes pregnant by accident. Lara decides that abortion is not a solution.

Am Himmel Der Tag focuses on the reactions that everyone has towards Lara and in extension to any pregnant girl of her age. Nora takes this as a joke, her parents threaten her and the bartender is just ignorant. There is a diffused fear that Lara would fail as a mother, no one can believe that she’s ready or mature enough for something like that. She decides to quit her previous life which was full of fast and easy sex, she also drops back her studies and her only concern is the baby that she expects. Lara decides to face all the personal problems alone and at the same time social questions that arise. She prefers to isolate herself and create her own personal womb that protects her from all outsiders. But despite all these precautions, it seems that it is not enough.

Pola Beck seems to be able to perfectly control her film, which has three different dramaturgical levels. The beginning is pure acid, fast-paced and full of music focused on today’s generation. The middle part follows a slower path with pitching points of drama that will lead to the unexpected and emotionally powerful end climax which is probably the best part. Of course the quite well balanced screenplay by Burkhardt Wunderlich helps with that purpose. Despite the important presence of all the actors, the film could be easily characterized as a one-woman show and Aylin Tezel is so persuasive in her role.

Am Himmel Der Tag is a true contemporary film that examines real issues that the 20-something generation faces today. Beck seems to be affected by the Berliner Schule but only in the field of her content. Technically she has a quite different approach; it is eye-catching and vivid. She seems even from her first film to be able to strike her audience with a true issue in a realistic way. There’s no doubt that Am Himmel Der Tag could be one of the strongest competitors for this year’s awards, it is an articulated film that can easily stand out.

Out of the Past